You are here: Home / Inspiration / On set / Grigorij Richters

On set with Grigorij Richters 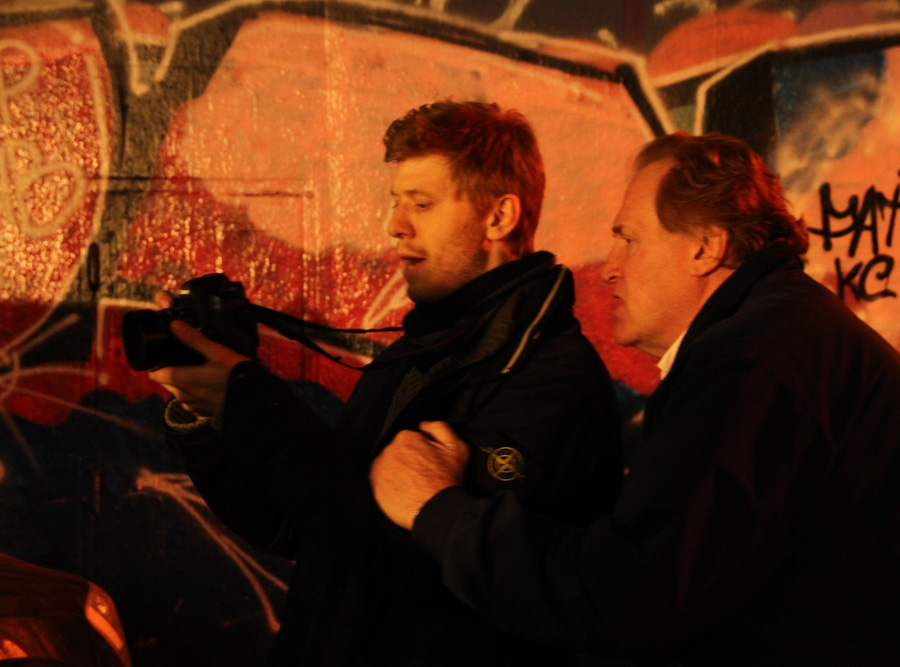 We also made extensive use of the OConnor fluid heads – at one point we were shooting with 20 cameras. The OConnor 120 EX fluid head was particularly helpful for our green screen shoots as it can handle a heavy payload and offered our camera men efficient and precise performance.

The project began in 2010 after Grigorij watched a BBC documentary – The Good, the Bad and the Ugly – about the threat asteroids pose to life on earth. The seed was planted and after a few months of research, Grigorij seized the opportunity to transform his idea into a feature film. With a limited budget, 10 page script, a DSLR and Litepanels LED lights, Grigorij worked with friend and actor Moritz von Zeddelmann, to develop the idea.

The result was 51 Degrees, a 90 minute feature film project that involved 3,500 people, including 2,500 extras that converged on Piccadilly Circus to form part of one of the largest crowd scenes shot in London. Featuring 20 minutes of original music composed by Queen’s Brian May, the film will be the highlight of STARMUS festival in Tenerife in September during a private screening.

Shot exclusively in and around London over a period of three years, 51 Degrees follows protagonist Damon Miller (played by Moritz von Zeddelmann) as he attempts to film humanity’s last days on earth after he discovers that a massive asteroid is on a collision course with the planet. In addition to writing and directing the film, Grigorij also plays a role in the narrative itself as Miller’s friend, Grigorij, who is, in effect, filming him.

51 Degrees is shot in guerrilla style with a lot of handheld camera work. The film also incorporates more produced elements such as aerial shots of the city, and mock CCTV footage.

How Vitec kit supported the production

Production was a nightmare in terms of preparation and production, for the crowd scenes especially. For the Piccadilly shoot we needed at least 400 extras to film the movie’s pivotal scene where the public discovers that the world will be ending in six hours. The challenge was that we didn’t have permits to shoot so everything that we did had to be evaluated in terms of the gear we needed – how heavy was it, how long would it take to set up, and how quickly we could pick it up and run, if we needed to.

The Sachtler tripods were especially helpful here as they were extremely light, portable and very quick to set-up and break down. We actually tested which tripods could be set-up in the fastest times and Sachtler came out on top each time. The efficiency of the tripods was essential in choosing our equipment because if we were just 20 seconds too slow in setting up or packing up the kit, we could have been arrested.

We also made extensive use of the OConnor fluid heads – at one point we were shooting with 20 cameras. The OConnor 120 EX fluid head was particularly helpful for our green screen shoots as it can handle a heavy payload and offered our camera men efficient and precise performance.

Most of our lighting for the feature was Litepanels. We really couldn’t have done the film without the Litepanels gear. A number of the Litepanels products were used throughout filming – from the on-camera Micro and Mini Plus Daylight LEDs, to the 1×1 Bi-Color panels. The gear gave us a really handy option for the shoots in that we didn’t have to set up big lighting rigs – which we didn’t have the time or the budget for. Litepanels became lifesavers – and I often had a few production assistants holding up and positioning the lights for me as they were an essential part of the filming, especially outdoors.

A lot of our filming was done on the run and there really wasn’t anything on the pro-video market at the time that would have allowed us to get the job done like the Litepanels gear did.

Grigorij Richters, director, writer and producer, began his career in front of the camera as a child model in his home country of Germany. By the age of six he was already obsessed with cameras and began making his own films on a JVC Hi-8 camcorder.
Grigorij made a documentary on Franz Kafka that he sold to a German university and directed a 30 minute short film called Dean’s Life before the age of 16. He completed his A-Levels at film college Hurtwood House in the UK and went on to study under famed Czech-American director Milos Forman at FAMU Film School in Prague.
Following a stint in New York City working as a freelance social media consultant for MTV, Grigorij moved back to the UK and was appointed the Kevin Spacey Filmmaker in Residence at the Old Vic Theatre in London. This provided the platform for the young filmmaker to conceive of and develop his first full-length feature film titled 51 degrees.